The vision of the former USS CHARLES F. ADAMS (DDG-2) being put on display as a Naval ship museum, representing the ADAMS class of guided missile destroyers, began with the sailors who served in these fine ships, but it has now also become the vision of many former Navy-men and numerous residents of the Jacksonville, Florida area. That vision sees a lasting and fitting memorial being established to honor all veterans, but especially paying tribute to the crewmen who served in this special class of warship.

To excite, inspire, educate and entertain the general public; to create a venue dedicated to the mission, memory and men of the Adams Class destroyers; and to distinguish and define the role of the Navy in securing and maintaining a free and safe world in which the United States stands as the vanguard for other countries to thrive.

History of Efforts to Save the USS CHARLES F. ADAMS (DDG-2) 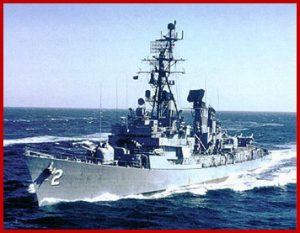 The ex-USS CHARLES F. ADAMS DDG-2, the last surviving ship of the Adams Class guided missile destroyers, was the first guided missile destroyer built from the keel up by the U.S. Navy as a guided missile ship. This heralded a new age of U.S. Navy ships with advanced guided missile weapons systems. The USS CHARLES F. ADAMS revolutionized naval warfare from two aspects, anti-air warfare and anti-submarine warfare. The ship‘s new Tartar surface-to-air guided missile system was designed to protect carrier task groups against attack by hostile aircraft. As the Cold War progressed, the U.S. Navy became increasingly concerned regarding the threat posed by the massive numbers of Soviet bomber and cruise missiles that could be launched against our carrier task groups. The Tartar guided missile system in the ADAMS class DDGs provided the U. S. fleet the much needed protection from large scale Soviet bomber forces. Throughout the Cold War years of the 1960‘s through the 1980‘s, the ADAMS class DDGs were unsurpassed in their deterrent role, protecting U. S. fleets as they moved through the world‘s oceans. These very capable ADAMS class DDGs ships were soon to team with the new guided missile cruisers in a new Anti-Air Warfare (AAW) capability that could protect both the aircraft carrier and its escorts and replenishment ships. The Soviet submarine threat that included both attack submarines and fleet ballistic missile submarines was a threat to U.S. forces anywhere in the world. The ADAMS Class guided missile destroyers‘ new Anti-Submarine Warfare (ASW) capabilities included advanced sonar systems to detect hostile submarines, and the Anti-submarine Rocket (ASROC) fired from an 8 cell box launcher between the stacks on the 01 level amidships. The ASROC payload was either an acoustic torpedo (MK 44 or MK 46) or a nuclear depth bomb and could be delivered by the rocket towards a target at a range of five nautical miles.

The Jacksonville Historic Naval Ship Association (JHNSA) is a 501(c)3 non-profit organization of Northeast Florida residents, local Jacksonville businessmen, and retired military veterans who have the vision of establishing the former guided missile destroyer USS CHARLES F. ADAMS (DDG-2) as a Naval Ship Museum in downtown Jacksonville on the banks of the St Johns River. JHNSA is teamed with the Adams Class Veterans Association, Inc. (ACVA) (also a 501(c)3 non-profit) to obtain donation of the USS CHARLES F. ADAMS from the U.S. Navy.

This Naval Ship Museum would be:

A lot of individuals and organizations have already expressed their written support for this project, including the Florida Secretary of State, the Florida Director of Veterans’ Affairs, Duval County Public Schools, Jacksonville area Boy Scouts, Jacksonville Sea Cadets, Jacksonville University ROTC, Northeast FL and Southeast GA JNROTC units, and numerous veterans groups from around the country.