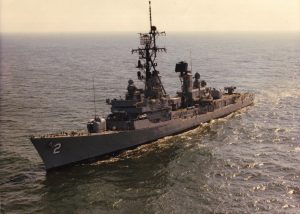 Following WWII, missiles were new and slowly being incorporated into the fleet. In 1956 the USS GYATT (DD-712) was converted into a guided missile test and evaluation platform. She was redesignated DDG-1 & routinely operated from Naval Station Mayport. The navy realized a ship armed with guided missiles was more effective than a ship with 5-inch guns. So the navy began building the first guided missile destroyer from the keel up, the USS CHARLES F. ADAMS (DDG-2). On September 8th 1959 the USS CHARLES F. ADAMS (DDG-2) was launched at Bath Iron Works in Bath, Maine.

USS CHARLES F. ADAMS, one of the most versatile and dependable ships of the United States Fleet, made ten Mediterranean deployments, two Middle East deployments and one Indian Ocean Deployment, as well as numerous local operations and Caribbean exercises in her thirty year career.

The first active duty stop for the Adams in October 1962 was the Cuban Blockade. The U.S. Navy awarded the Adams the Armed Forces Expeditionary Medal for Participating in the Cuban Missile Crisis, 1962. The Armed Forces Expeditionary Medal was authorized for service in the Cuban quarantine, 24 October through 31 December 1962. As defined in the Navy and Marine Corps Awards Manual, service for either of these awards was performed in the water area from 12 degrees to 28 degrees North latitude, and from 66 degrees to 84 degrees West longitude. Many ships and units took part in contingency operations during this period but, since they were not in the geographical area defined for Cuban service, or did not perform service as defined below, they are not credited with it. Four Adams class ships were honored with the Medal. They are: Charles F. Adams (DDG 2), 24 Oct – 30 Nov 62; John King (DDG 3), 7 Nov – 6 Dec 62; Lawrence (DDG 4), 24 Oct – 6 Dec 62; and Sellers (DDG 11), 24 Oct – 21 Nov 62.

ADAMS also served as flagship for Cold War surveillance of Soviet submarines in the North Atlantic, and patrolled the turbulent waters of Lebanon, Libya and the Persian Gulf when troubles brought the Navy to those regions in the late 1970′s and all of the 1980′s.

ADAMS participated in the project Mercury manned space flight recovery operations in the fall of 1962. Following CDR. Schirra’s orbital flight and the successful recovery, ADAMS proceeded to Norfolk to commence her duties as Surface-to-Air TARTAR Missile School Ship. This was a first, both for ADAMS and the Navy. While engaged in these duties, the Cuban missile crisis developed and in the early fall of 1962, ADAMS was actively involved in the quarantine and surveillance operations. 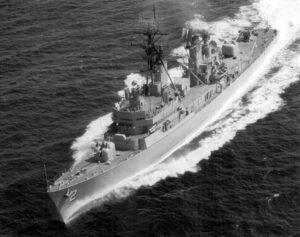 CHARLES F. ADAMS made the first of her Mediterranean deployments in November 1964. In 1968, ADAMS became only the second DDG in history to hit a surface target ship with a TARTAR missile.

In July 1969, ADAMS left her home port of eight years, Charleston, S.C., and moved to Mayport, FL, where she became Flagship for COMDESRON 24 during a 1969 Mediterranean deployment.

In 1972, CHARLES F. ADAMS served as a member of the Standing Naval Forces Atlantic, STANAVFORLANT, where she operated with ships from Canada, Great Britain, the Federal Republic of Germany, Portugal, The Netherlands and Turkey.

In August of 1973, during an eight month Middle East deployment, CHARLES F. ADAMS visited many countries not normally seen by Navy ships. Transiting the South Atlantic, ADAMS first stopped at Recife, Brazil, then transited straight across the Atlantic, rounding the Cape of Good Hope and visited Angola, Mozambique, Mauritius, Kenya, and many other African countries.

During her regular overhaul at the Philadelphia Naval Shipyard in 1975, CHARLES F. ADAMS was equipped to conduct twin drop-zone helicopter flight operations. Also during the 1975 overhaul, she gained a new MK42 MOD 10 5″/54 gun system, a new gunfire control system including a forward looking infra-red sensor, a laser ranging unit, and an AN/SP5-39A height finding radar.

CHARLES F. ADAMS deployed in 1976 as a test platform for the Gunnery Improvement Program and, after making Mediterranean deployments in 1977 and 1978, she once again entered the Philadelphia Naval Shipyard where more changes were made on the weapons systems, including the addition of the new Twin-Dome Pair Sonar System and Harpoon surface-to-surface missiles.

After the overhaul, she began her first major deployment in two years, sailing in December 1980 to the Seventh Fleet for Indian Ocean operations with the USS INDEPENDENCE (CV-62) Battle Group. During the 204 day Indian Ocean deployment, CHARLES F. ADAMS steamed over 65,000 miles, crossed the Equator eight times, transited the Cape of Good Hope and Suez Canal and visited Banbury, Australia, the farthest East the ship had ever sailed.

On 14 June 1982, CHARLES F. ADAMS departed Mayport for her second STANAVFORLANT deployment. During the six month tour, she operated with the forces of and visited England, France, Norway, Belgium, Denmark, Holland and Germany. Upon her return, she once again entered Philadelphia Naval Shipyard for regular overhaul. During this overhaul, the ship received the SLQ-32, a Chaff deployment system, and a major revamping of shipboard air conditioning systems and additionally, major structural work was accomplished along with other alterations to ensure effective operations during the next operating period.

On 1 February 1984 CHARLES F. ADAMS completed overhaul and returned to Mayport, Florida. The remainder of 1984 was spent training. She made a Caribbean cruise for weapons systems training and completed refresher training at Guantanamo Bay, Cuba. After completing pre deployment build-up, CHARLES F. ADAMS departed for her second Middle East deployment, 4 February 1985. During this deployment, spent mostly in the Persian Gulf, the ship was underway over 85% of the time and visited Palma de Mallorca, Lisbon, Karachi, Bahrain, Jeddah, and Djibouti.

From January until March 1986, CHARLES F. ADAMS underwent a Selective Restricted Availability (SKA). Equipment was repaired and replaced throughout the ship and major structural repairs were done. In April 1986, ADAMS participated in operation Ocean Venture. During this cruise she stopped in Port-Au-Prince, Haiti for a two day port visit. While there she was visited by the Head of State of Haiti, Lieutenant General Henri Namphy, along with other top officials.

From April through September 1986, CHARLES F. ADAMS underwent training and various inspections including the ship’s command inspection, preventive maintenance system inspection, supply management inspection and nuclear technical proficiency inspection. During that time, she conducted Naval gunfire support missions off the coast of Vieques Island and at Bloodsworth Island. After all inspections and qualifications were completed, she was awarded the Battle Efficiency “E”.

After MED 1-89 CHARLES F. ADAMS conducted numerous Caribbean law enforcement operations supporting the war on drugs, during which time she seized eight kilograms of cocaine. Upon her return from her last active underway period, she successfully completed an underway material inspection by the Board of Inspection and Survey and was found fit for further service although scheduled for decommissioning.

First in her class of guided missile destroyers, CHARLES F. ADAMS was assigned as a unit of Destroyer Squadron TWELVE, immediately prior to decommissioning, and was transferred to Naval Inactive Ship Maintenance Facility Philadelphia, PA.

The USS Charles F. Adams was decommissioned August 1, 1990 from her homeport of Mayport, FL. and retired to the Philadelphia Naval Shipyard to await final disposition. 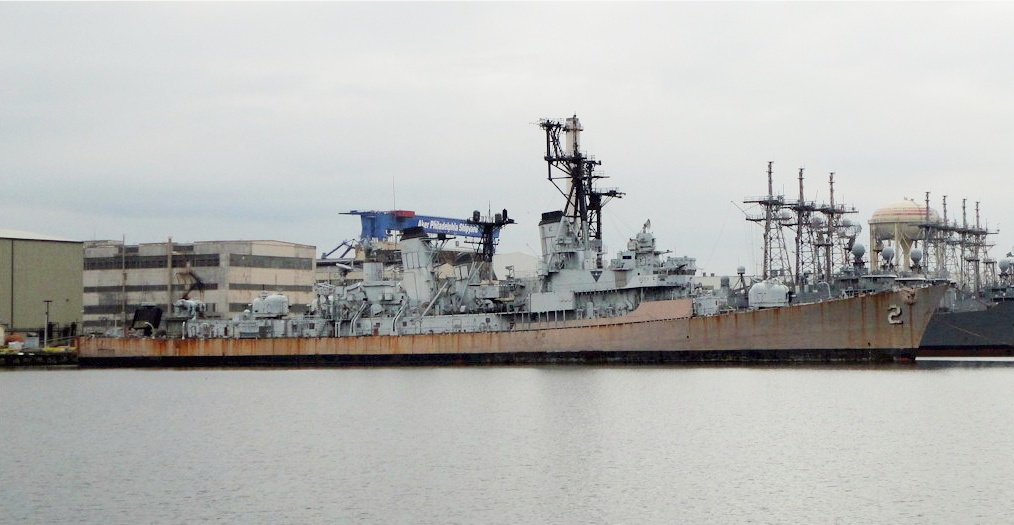